Anki, having recently released the adorable, Wall-E like, AI driven robot named Cozmo has a fair amount of mind share right now. But it didn’t start with Cozmo for Anki, it began earlier with “Overdrive”. If you were a Hot-Wheels or Matchbox loving kid, you will love this!

**Update – Nov 9, 2016** I received shipment of the Anki Overdrive Starter Kit and will be reviewing it shortly!

First, if you haven’t seen Cozmo, the lovable robot inspired by Wall-E yet you need to check him out. I cannot get enough of this little guy, and I am sure you will be fascinated with how amazing this robot is. I wrote a small piece about him not too long ago.

Moving onto the focus of this post, Anki already had a fantastic product which is akin to Hot-Wheels on steroids.

Overdrive is an AI driven race car game that uses self-aware robotic “supercars” that run on a specialized track surface that is available in nearly endless configurations with add-on track parts from Anki. So how does it work? Well this video will explain it better than I…

As the video explains, each car has a dedicated CPU and camera that scans the coating on the track allowing them to understand the environment around them.

Using AI the cars will analyze what the best course of action for its attack is and use that data to either pass the competition or allow you to blow your opponents away using one of many possible weapons available to your Supercar.

The best place to start with Overdrive is with the starter kit which offers 8 “battlefield” track configurations right out of the box, and two Supercars named “Skull” and “Groundshock.”

Other cars that are available for purchase come with various types of weapons and defense tactics. Learn more about other Anki Supercars here: Meet the Supercars.

The “game” isn’t an entirely AI-powered and ran activity. There is plenty of action from you, the player, as well. Using the Overdrive app for both Android or iOS, you can take part in various types of races. 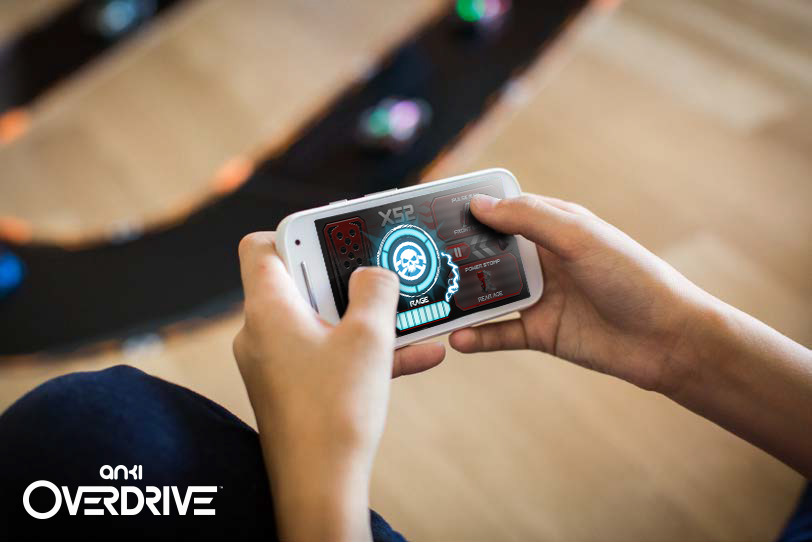 Anki has also recently released “Supertrucks” which are three times the size as the Supercars. They are considerably slower but considerably stronger as well. Have a look at these monsters here: Meet the Supertrucks.

In Canada, Overdrive can be purchased directly from Anki for $199.99 CAD and should you be interested in additional Supercars, Supertrucks or other accessories; pricing breaks down as follows:

Overdrive kits, cars, trucks, and accessories can also be purchased from Amazon, Toys R’ Us and Indigo. Indigo will also have a limited edition version of X52 at launch known as X52 ICE.

I’m hoping to review Anki Overdrive in the near future. Stay tuned for more!